Beith and District Community Council were restoring a forgotten garden known locally as the Coronation Garden.  They wanted to create a space for the community to enjoy, meet other people and play draughts on the original giant draught board, which had fallen into disrepair.

The community council made good inroads into the works in the garden, working in partnership with local people and other community groups to bring the garden back to life, and generating the investment through various funding streams. Three new benches were installed, commemorating the world wars, the Platinum Jubilee and keyworkers during the pandemic. The draught board was restored with support from Kilbirnie Men’s Shed, who made new pieces to replace those that were too damaged to save. Two memorial trees were planted, marking the passing of HRH Prince Philip and those lost to COVID-19.

To mark the Queen’s Platinum Jubilee, the community council submitted requests for support to the Community Benefit Wish List, looking for a donation of a flagpole and support to install it. 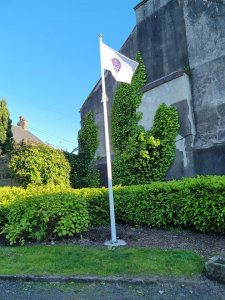 The flagpole would enable the community council to host a flag raising ceremony as part of their planned celebrations on the 2nd of June.

Valley Group, a building services company contracted for various works at North Ayrshire Council, responded to the call for help and within 4 weeks of the request going live on the list, the flagpole had been donated to the group. A local business, CK Contracts in Glengarnock, carried out risk assessments for the community council and installed the flagpole for free in time for the Jubilee event to take place.

Helen McNaughton, Chair of Beith and District Council told us that “Both contractors responded quickly and were very efficient in delivering their promises. From the request going live to full completion the support was over a 6-week period…Both contractors kept in touch either via email; texts and phone calls. Both were a pleasure to work with.

The support to the project allowed us to deliver our aim to raise a Platinum Jubilee flag to commemorate this once in a lifetime experience. The site of the flagpole is in the garden that was originally created for the Queen’s Coronation and is a fitting addition to the garden. The community were very appreciative of the flagpole and as the flag was raised the National Anthem was played. It was a poignant moment and one that the younger generations will remember and pass onto future generations. The flagpole has created a moment in the history of Beith.  Beith and district Community Council have now replaced the jubilee flag with our own flag to help promote and raise awareness of the community council.”