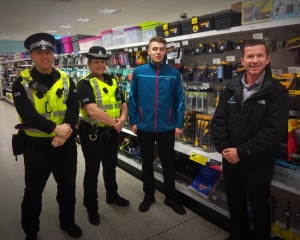 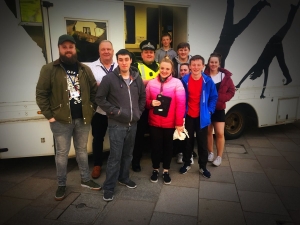 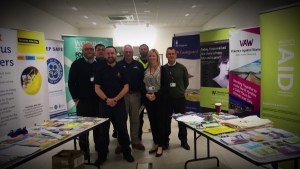 Your community, our priority – the message from police and partners in North Ayrshire following a multi-agency day of action focusing on Irvine Town Centre.

In response to local concerns and a recent increase in antisocial behaviour and disorder in the area a series of interventions have aimed to target issues identified as a priority for local residents and visitors.

As part of the Prevention First initiative police have been working with partners including North Ayrshire Council, the Scottish Fire and Rescue Service, local housing providers and community representatives.

On Friday 10th May 2019 additional officers were deployed in the area for activities including:

Speaking on Friday Chief Inspector Brian Shaw, Area Commander for North Ayrshire, commented “we are committed to tackling issues of local concern and to working with communities in doing so.  Today was an opportunity to highlight just some of the work that takes place on a daily basis as we work to make North Ayrshire a safer place to live, work and visit.

“We have been working with the North Ayrshire Council Antisocial Behaviour Investigation Team, meeting young people and their parents or carers, to highlight the impact and consequences of engaging in antisocial behaviour. Additional police patrols have been conducted in the area, and we are working closely with public space CCTV operators and businesses to tackle any issues that arise.

“A recent multi agency walkabout in the area with community representatives identified particular areas of graffiti and damage which contribute to the fear of crime. An action plan is underway which includes environmental improvements and we will continue to support our partners in their efforts.

“We would like to thank everyone who took the time to speak with us and our partners for their continued support. I would encourage anyone with any concerns about crime and safety in their community to contact us.”

Police Scotland can be contacted by calling the national non-emergency number 101 (in an emergency always dial 999).